A beautiful, triangle-shaped glow of cosmic light appears in the eastern sky before sunrise for two weeks, from late September through mid-October for those of you who live in mid-northern latitudes (e.g., most of the US, southern Europe, Japan, northern China).  Called the “zodiacal light” (as the triangle of light extends from the sun along the constellations of the zodiac), this wondrous apparition can be viewed only if you are in a dark location, far away from bright, city lights.  The zodiacal light will appear slightly dimmer than the Milky Way, and will rise up through the zodiacal constellations Leo, Cancer and Gemini. 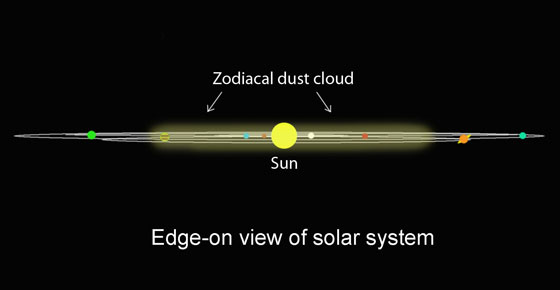 Zodiacal light is caused by the reflection of sunlight off of dust particles in the plane of the solar system. It’s viewable during the spring and summer of each year. Quoting NASA, “Zodiacal light is so bright this time of year because the dust band is oriented nearly vertical at sunrise, so that the thick air near the horizon does not block out relatively bright reflecting dust. Zodiacal light is also bright for people in Earth’s northern hemisphere in March and April just after sunset.”