The big news for the night sky this month is the appearance of Comet PanSTARRS to residents of the Northern Hemisphere of Earth (e.g., the U.S., Europe, China).  We’ve produced a separate blog article for the comet: Click here to read that article.

But you can also see the giant planet Jupiter during the evening hours in March 2013.  A particularly good night for identifying Jupiter is March 17 (March 18 for those of you in the Eastern Hemisphere of Earth [e.g., Australia, Japan, China, India]).  Plus, Saturn rises after midnight and is visible to you early birds toward the southwestern horizon. 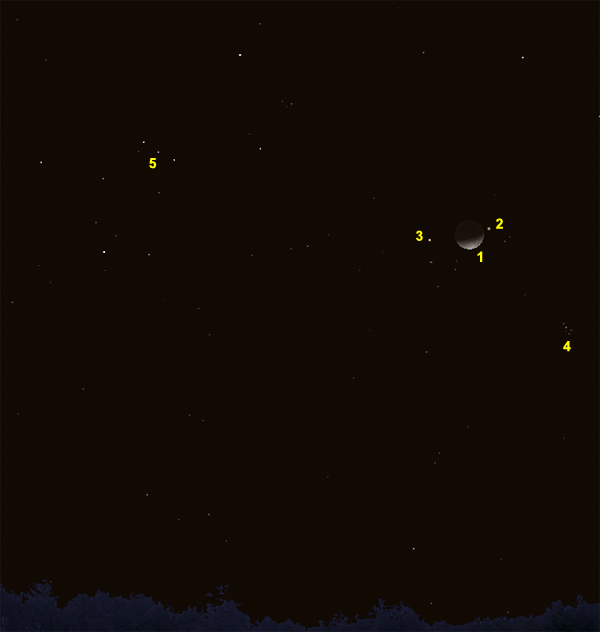 END_OF_DOCUMENT_TOKEN_TO_BE_REPLACED

If you’re an early riser, you’re in astronomical luck in October! While Mars is fading rapidly in the western sky during the early evening hours, Venus and Jupiter dominate the early morning eastern sky.  And if you live in mid to northern latitudes on Earth, you’re in for a special treat: the zodical light, or “false dawn.”

The false dawn looks like a faint, triangular-shaped light that stretches from the eastern horizon up into the sky above.  It appears during the period of time between about 1 to 2 hours before sunrise at about this time of year.  This year, the best time to view this spectacle is between October 13 and 27.  To see it, go far from city lights on a clear, moonless night.

This strange celestial display is caused by the reflection of sunlight off of tiny particles of dust in space.  The dust orbits the sun in the same way Earth does. So at this particular time of the year — when the days and nights are of roughly equal length — we view this dust when it is aligned vertically in our pre-dawn, eastern sky.  A similar thing will happen six months from now, only the triangular shape of light will appear in the western sky, after sunset.

The Planets This Month

But fear not, fellow night owls, for you too can feast your eyes on some celestial treats! The planets Neptune and Uranus will be visible through binoculars and small telescopes during the evening hours this month. While you can see both Neptune and Uranus through a telescope, Uranus — strictly speaking — is just barely visible to the naked eye — but just barely! In order to see it, you’d need to go far from city lights and view it on a clear, moonless night. (And you better have good eyesight to boot!) We recommend sticking with your telescope or binocs!

Finding your star in the night sky