Many people who want to view their star through their own telescope go out and buy a telescope right away, but later find that the expensive telescope they bought doesn’t really suit them. Or they eventually determine that they really didn’t like astronomy as a hobby like they thought they would. Either way, their telescopes end up buried in a closet, basement or attic, and they find that they’ve wasted a lot of their hard-earned money.  Many needlessly burn out on a hobby they might otherwise have enjoyed the rest of their lives if they had only taken a more measured approach in the beginning.

It’s really best to ease into astronomy, learn about the different types of telescopes, try using a few, become an educated consumer, and then make a purchase.  A great way to start is to get the following:

END_OF_DOCUMENT_TOKEN_TO_BE_REPLACED

Imagine the beautiful green, wispy branches of a Christmas tree — adorned with red, blue and white lights — gracefully on display in the heavens above.

Newborn stars, hidden behind thick dust, are revealed in this image of a section of the Christmas Tree Cluster from NASA’s Spitzer Space Telescope. Infant stars appear as pink and red specks toward the center and appear to have formed in regularly spaced intervals along linear structures in a configuration that resembles the spokes of a wheel or the pattern of a snowflake. Hence, astronomers have nicknamed this the “Snowflake Cluster.”

Like a dusty cosmic finger pointing up to the newborn clusters, Spitzer also illuminates the optically dark and dense Cone Nebula, the tip of which can be seen towards the upper right corner of the image.

And here’s some other neat space imagery for you!

The object that is glowing intensely red in the image is the Carina Nebula.  The Carina Nebula lies in the constellation of Carina (The Keel), about 7500 light-years from Earth. This cloud of glowing gas and dust is the brightest nebula in the sky and contains several of the brightest and most massive stars known in the Milky Way, such as Eta Carinae. The Carina Nebula is a perfect test-bed for astronomers to unveil the mysteries of the violent birth and death of massive stars.  Click here for more information about this image.

Finally, here is a beautiful video — set to equally beautiful music — showing the night skies over Cornwall and Scilly, in Great Britain.

Name a star for that special someone this Christmas!
Consider our Instant Gifts: Download, Print and Give 24/7!

The best display of shooting stars all year — the annual “Geminid meteor shower” — is going on now! Although the peak occurs over the evening of Saturday, December 14, a bright Moon will interfere with this year’s Geminids, meaning that only the brightest Geminid shooting stars will be visible. In this article we’ll discuss what a meteor shower is, how to view the shooting stars, and when to view them.

END_OF_DOCUMENT_TOKEN_TO_BE_REPLACED

There is a lot to love about astronomy, and photographer Julien Girard offers a “heartfelt” example in this image. A bright pink symbol of love appears to float ethereally against the backdrop of the night sky over the European Southern Observatory’s (ESO’s) Paranal Observatory in northern Chile. Girard drew the heart in the air by shining a tiny flashlight keychain at the camera during a 25-second exposure with a tripod.

The central region of the Milky Way appears in the middle of the heart, as the plane of our galaxy stretches across the image. The stars of the constellation of Corona Australis (The Southern Crown) form a glittering arc of jewels at the top of the heart’s left lobe. The diffuse glow to the left of the heart’s lowest point is zodiacal light, caused by the scattering of light from the Sun by dust particles in the Solar System.

On the far right horizon, the 8.2-metre telescopes of the ESO Very Large Telescope (VLT) facility stand out in silhouette atop Cerro Paranal. The lights of a car driving down from the observatory platform can be seen just to the left of the telescopes.

Julien Girard is an ESO astronomer based in Chile, who works at the Ver Large Telescope (VLT). He is the instrument scientist for the NACO adaptive optics instrument on the VLT’s Unit Telescope 4. He submitted this photograph to the Your ESO Pictures Flickr group, from where it was picked out as an ESO Picture of the Week. 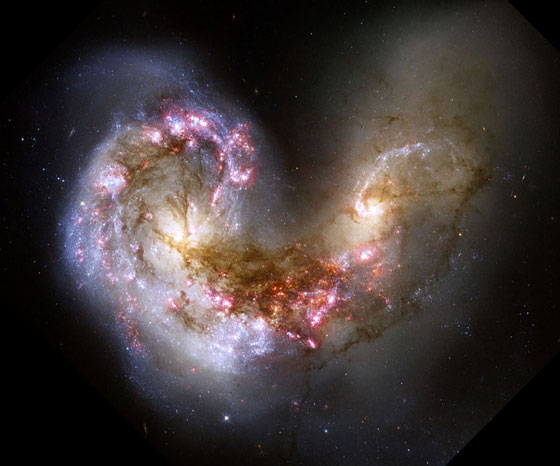 This Hubble Space Telescope image of the Antennae galaxies is the sharpest yet of this merging pair of galaxies. As the two galaxies smash together, billions of stars are born, mostly in groups and clusters of stars. The brightest and most compact of these are called super star clusters.

This picture of a heart-shaped pit on Mars was taken on February 26, 2008 by the Mars Reconnaissance Orbiter (MRO). It is approximately 2 kilometers (1.2 miles) long and is centered near Mars’ equator. The pit is one of many adjacent to Hydaspis Chaos, a jumbled topographic depression thought to have formed by collapse of the surface due to—perhaps—catastrophic release of groundwater.

Just in time for its Valentine’s Day 2000 date with 433 Eros, the Near Earth Asteroid Rendezvous (NEAR) spacecraft snapped this photo during its approach to the 21-mile (34 kilometer)-long space rock. Taken Feb. 11, 2000 from 1,609 miles (2,590 kilometers) away, the picture reveals a heart-shaped depression about 3 miles (5 kilometers) long. Scientists at the Johns Hopkins University Applied Physics Laboratory – which manages the NASA mission – processed the image on Feb. 12, 2000.

October’s the month for Halloween, and Name A Star Live can help you get in the mood for trick-or-treating! Here are some spooky sights and sounds from outer space.

First, let’s set the scene with some scary space sounds! Before scrolling down this webpage any further, turn up your speakers or headphones, and start this video of some eerie sounds from Saturn:

Let’s start with a witch who resides just outside the Name A Star Live constellation Orion:

As frightening as this witch may be, no need to fear: She’s about 800 light-years away, and so won’t be casting any spells on us for a long time to come! She’s actually a giant collection of dust particles that is reflecting light off of a star named “Rigel” in Orion.

I ain’t afraid of no ghosts — especially when they’re 1,200 light-years away! This phantom of the night haunts the constellation Cepheus, which borders the Name A Star Live constellations Cassiopeia and Cygnus.

This ghost is located a little closer to Earth, at 380 light-years away in the Name A Star Live constellation Taurus. It’s part of the Pleiades star cluster (a.k.a. “The Seven Sisters”), which many people confuse with the Little Dipper. Let’s hope this ghost doesn’t get any closer to Earth!

The Ghost Head Nebula, or NGC 2080, is a star-forming region in the Large Magellanic Cloud, a satellite galaxy of our own Milky Way Galaxy visible from the southern hemisphere of Earth. The nebula spans about 50 light-years across.

What’s Halloween without spiders? The Black Widow Nebula hangs in her web in the southern hemisphere constellation Circinus. But arachnophobes have no fear! This spider from the depths of space is actually a stellar nursery. In this Spitzer Space Telescope image, the two opposing bubbles are being formed in opposite directions by the powerful outflows from massive groups of forming stars. The baby stars can be seen as specks of yellow where the two bubbles overlap.  So upon seeing the Black Widow nebula, instead of screaming shouts of terror, we should say, “Aw, how cute!”

Much closer to home than any of the nebulae presented above, Mimas — a moon of Saturn — appears ready to blast Earth out of existence! We better keep a close eye on this scary menace!

Finally, we wish you a Happy Halloween with this solar image showing active regions on the Sun that combined to look something like a jack-o-lantern’s face on October 8, 2014.  This image blends together two sets of extreme ultraviolet wavelengths to create a particularly Halloween-like appearance.

We hope you’ve enjoyed these spooky sights and sounds!

What has Saturn ever done to us?

No, there’s not an insurgency planning to take action against the planet Saturn!  Rather, this month Saturn will be at what astronomers call “opposition,” which is a great time to observe the beautiful ringed planet. On June 27 (June 28 for those of you in Australia, Japan, China, India and other parts of the eastern hemisphere), Saturn will be at opposition, meaning Saturn will be on the opposite side of the sky from the sun: When the sun sets that evening in the west, Saturn will rise in the east. Really, all of June and into July is a great time to see Saturn. You can use the Moon to find Saturn (and Jupiter) in late June:

On June 27, look for Saturn immediately adjacent to the Moon.

For the best view, wait until at least two hours after sunset to look at Saturn through a telescope.  (Before then, you’ll be looking at Saturn through the thicker layers of Earth’s atmosphere near the eastern horizon.) So get out your telescope and take a look at the beautiful ringed planet this summer!

Look for Jupiter too! 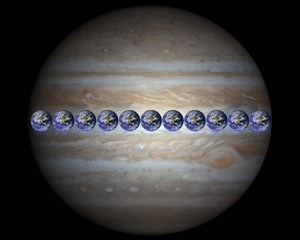 In addition to Saturn, you can see the giant planet Jupiter in the Name A Star Live constellation Libra this month. Viewed through a telescope, you may see up to four of Jupiter’s largest moons. And did you know that 11 Earth’s could fit across the width of Jupiter?

Jupiter viewed from the northern hemisphere…

Viewed from the southern hemisphere…

Our Moon Tweets let you know when the Moon is in a Name A Star Live constellation.

If you’ve been online lately, you’ve probably heard about the “Super Blue Blood Moon Eclipse” coming up on January 31, 2018. What’s this all about?

Well, there are three lunar events happening during the pre-dawn hours that day:

Put all three together, and you get the “Super Blue Blood Moon Eclipse.”

What’s more, this is the first Super Blue Blood Moon Eclipse visible from the western hemisphere in 150 years.

Here’s a NASA video about the Super Blue Blood Moon:

END_OF_DOCUMENT_TOKEN_TO_BE_REPLACED 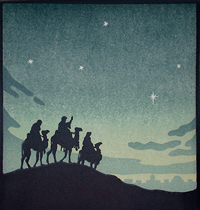