Here are some beautiful space photos and videos that have been posted on the Internet recently. Enjoy!

In the center of this image, taken with the NASA/ESA Hubble Space Telescope, is the galaxy cluster SDSS J1038+4849 — and it seems to be smiling.  The cluster is located about 4.5 billion light-years from Earth in the Name A Star Live constellation Ursa Major.

You can make out its two orange eyes and white button nose. In the case of this “happy face”, the two eyes are very bright galaxies and the misleading smile lines are actually arcs caused by an effect known as strong gravitational lensing.

Galaxy clusters are the most massive structures in the Universe and exert such a powerful gravitational pull that they warp the spacetime around them and act as cosmic lenses which can magnify, distort and bend the light behind them. This phenomenon, crucial to many of Hubble’s discoveries, can be explained by Einstein’s theory of general relativity.

In this special case of gravitational lensing, a ring — known as an Einstein Ring — is produced from this bending of light, a consequence of the exact and symmetrical alignment of the source, lens and observer and resulting in the ring-like structure we see here.

Hubble has provided astronomers with the tools to probe these massive galaxies and model their lensing effects, allowing us to peer further into the early Universe than ever before. This object was studied by Hubble’s Wide Field and Planetary Camera 2 (WFPC2) and Wide Field Camera 3 (WFC3) as part of a survey of strong lenses.

A version of this image was entered into the Hubble’s Hidden Treasures image processing competition by contestant Judy Schmidt.
Image Credit: NASA/ESA

A group of scientists used the Venus transit – a very rare event where a planet passes between Earth and the sun, appearing to us as a dark dot steadily making its way across the sun’s bright face – to make measurements of how the Venusian atmosphere absorbs different kinds of light. This, in turn, gives scientists clues to exactly what elements are layered above Venus’s surface. Gathering such information not only teaches us more about this planet so close to our own, but it also paves the way for techniques to better understand planets outside our solar system.

Transits of Venus are so rare that they only happen twice in a lifetime. About every 115 years, Venus will appear to cross over the face of our home star twice, with eight years passing between the pair of transits. This stunning phenomenon is not only incredible to watch, but it provides a unique opportunity for scientific observations of one of our nearest neighboring planets.

NASA’S Solar Dynamics Observatory, or SDO, and the joint Japanese Aerospace Exploration Agency and NASA’s Hinode mission took pictures of the entire event in several wavelengths of light. A team of scientists led by Fabio Reale of the University of Palermo used these pictures to watch the backlit planet as it crossed in front of the sun. By observing the planet’s atmosphere in different wavelengths of light during its journey, they learned more about what kinds of atoms and molecules are actually in its atmosphere.

Just as on Earth, each of the layers of Venus’ atmosphere absorb light differently from one another. Some layers may completely absorb a certain wavelength of light, while that same wavelength can pass right through another layer. As Venus passes across the face of the sun — which emits light in almost every wavelength of the electromagnetic spectrum — scientists get a rare chance to see how all different types of light filter through Venus’s atmosphere.

Studying the Venus transit can also help improve studies of planets around other stars.  Such exoplanets are often discovered by transits just like this, as we can detect the very small amount of light the planets block as they pass across their home star. The more we can observe transiting planets close to home the more it will teach us about how to study distant exoplanets that we can’t currently see in as much detail. When instrument technology advances, we may be able to gather better information about the atmospheres of such exoplanets as well.

While fireworks only last a short time here on Earth, a bundle of cosmic sparklers in a nearby cluster of stars will be going off for a very long time. NGC 1333 is a star cluster populated with many young stars that are less than 2 million years old, a blink of an eye in astronomical terms for stars like the Sun expected to burn for billions of years.

This new composite image combines X-rays from NASA’s Chandra X-ray Observatory (pink) with infrared data from the Spitzer Space Telescope (red) as well as optical data from the Digitized Sky Survey and the National Optical Astronomical Observatories’ Mayall 4-meter telescope on Kitt Peak (red, green, blue). The Chandra data reveal 95 young stars glowing in X-ray light, 41 of which had not been identified previously using infrared observations with Spitzer because they lacked infrared emission from a surrounding disk.

To make a detailed study of the X-ray properties of young stars, a team of astronomers, led by Elaine Winston from the University of Exeter, analyzed both the Chandra X-ray data of NGC 1333, located about 780 light years from Earth, and of the Serpens cloud, a similar cluster of young stars about 1100 light years away. They then compared the two datasets with observations of the young stars in the Orion Nebula Cluster, perhaps the most-studied young star cluster in the Galaxy.

These results were published in the July 2010 issue of the Astronomical Journal and are available online. NASA’s Marshall Space Flight Center in Huntsville, Alabama, manages the Chandra program for NASA’s Science Mission Directorate in Washington. The Smithsonian Astrophysical Observatory in Cambridge, Massachusetts, controls Chandra’s science and flight operations. 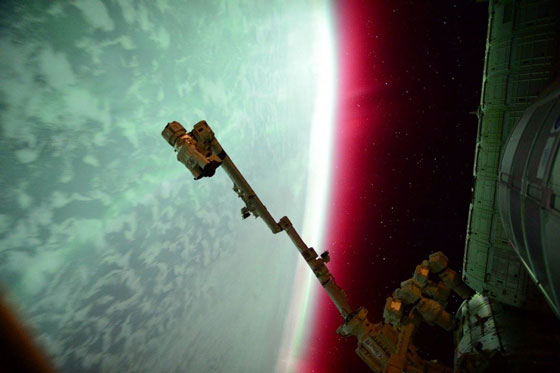 What bizarre alien planet is this ? It’s planet Earth of course, seen through the shimmering glow of aurorae from the International Space Station. About 400 kilometers (250 miles) above, the orbiting station is itself within the upper realm of the auroral displays, also watched from the planet’s surface on June 23rd. Aurorae have the signature colors of excited molecules and atoms at the low densities found at extreme altitudes. The eerie greenish glow of molecular oxygen dominates this view. But higher, just above the space station’s horizon, is a rarer red band of aurora from atomic oxygen. The ongoing geomagnetic storm began after a coronal mass ejection’s recent impact on Earth’s magnetosphere.