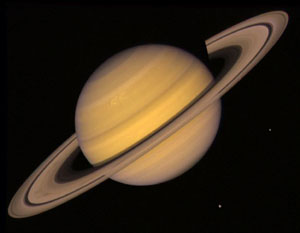 You can see some really neat things in the night sky this October: planets, shooting stars, and some rare, eery morning light called the “False Dawn”! You can use the Moon to find many of the interesting sights overhead this month, including Saturn. In fact, Saturn is getting lower and lower in the sky, and October will be the last chance to get a good view of Saturn in 2016.

October 3 — Look for Venus near the thin, crescent Moon over your western horizon near sunset. Venus will be the brightest point of light low on the horizon, near the Moon.

October 5 & 6 — The Moon will appear near the beautiful, ringed planet Saturn, which will be hovering near the constellation Scorpius.

October 7 & 8 — The Moon will appear near the red planet Mars.

On October 15 the planet Uranus will reach its maximum brightness for the year. So pull out your telescope and take a peek! Uranus will be easy to spot as it will appear next to the Moon that night. Through a telescope it will appear as either a grey circle or a faint green dot, depending on whether you have a small or large telescope, respectively.

If you’re an early bird, you can use the Moon in the pre-dawn skies to see a couple of beautiful sites in October. On October 19 the Moon will be near the “Hyades” star cluster, which is a V-shaped group of stars in the constellation Taurus. Nearby is another cluster of stars known as the “Pleiades.” Many people confuse the Pleiades with the Little Dipper, which is actually located over the northern horizon. And on October 28, the thin, crescent Moon will appear near Jupiter, the king of the planets, in the east near sunrise.

If you live far from city lights, consider waking up early sometime in the first half of October and look for the “False Dawn” — a beautiful, triangle-shaped glow of cosmic light that appears in the eastern sky before sunrise. See our blog article about “Fall’s False Dawn” for details.